Christmas and New Year was spent in India attending a cousin’s wedding and a nephew’s thread ceremony. It’s always fun going back to the country of my birth. I love the food, the music, the great value for money and energy of the place. But It’s also depressing seeing how slowly it changes. India’s stagnation was made even more evident, when six weeks later, I visited the beautiful town of Guilin in Guangxi.

Arrivals at Mumbai Airport set the tone. The automated fingerprint check, designed to streamline entry into the country, bureaucratically first demanded two thumbs, then four right fingers, and finally four left fingers; in Hong Kong a thumb imprint is sufficient to gain entry. More ominously, my fingertips were too dry, and like so many Indian transactions a bit of grease was needed to lubricate the process.

It was as recently as 1985 that India’s and China’s GDP, on a PPP basis, were the same. Now China’s is more than double India’s. And the gap feels widest in infrastructure.

The six hundred kilometre journey from Shenzhen North to Guilin, on China’s marvellous new high-speed train, takes just over three hours. It’s as good as the Eurostar, or the Japanese Shinkansen except cleaner and cheaper. The round trip cost just US$100 (plus US$20 booking fee to approved reseller China DIY travel – which provided useful videos of the station layout and a reassuring customer service function). The tickets are fairly easy to buy online. Unbelievably, China’s first 70 miles of high speed line was built just ten years ago – in time for the Olympic Games; now there are over 16,000 miles of track crisscrossing the country. China has two thirds of the world’s entire length of high-speed track. By way of comparison the USA (roughly the same size as China) rail company Amtrak operates 21,000 miles of rail, none high speed – built over 150 years!

I travelled from Mumbai to Pune by train for New Year, much to the amusement of my relatives. Most of them were familiar with the concept of railways…some had even used them in their youth before planes took off…so to speak. Usually they go by road. Mumbai-Pune is a distance of 150 km and takes just a couple of hours on the new Expressway. Taxis are affordable and there are many different classes of coach. I made the train journey around twenty years ago. The only discernible change was nomenclatural: Mumbai’s stunning Indo-gothic railway station is now Chhatrapatti Shivaji Terminus (CST), not Victoria Terminus (VT). Not before time – fifty years late which is par for the course for Indian Railways. 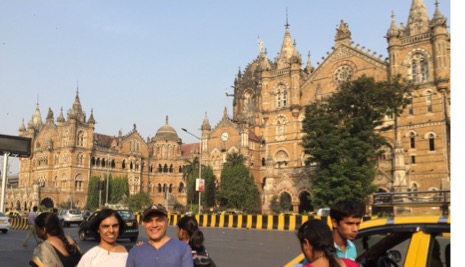 I’d left it too late to book online so I had to go to Dadar station to buy my return ticket. Indian Railways has 1.5 million employees, the role of most of whom was seemingly to frustrate my journey. I speak pretty good Marathi, but even so I found myself sent from one room to another, one queue to the next, struggling to make sense of their Byzantine system of reservations and quotas necessary to sit on an inter-city train. I finally secured a Tatkal ticket, a special quota released just the day before travel, for the journey to Pune. The clerk told me the best she could get me for the return leg was a weight-listed ticket which meant there was no guarantee of a seat. She recommended I book online next time. The process took over two hours. Somewhat uncharitably, I told her there was a place in Hell reserved for staff working in IR. The price of the train ticket even, with the Tarkal surcharge, was around Rs700. Barely £7.80 one way. And therein lies the problem.

The chasm in development between India and China isn’t a private sector, versus public sector issue. Both countries’ railways are state owned. Nor is a story about Indian bureaucracy, China Railway employs 2 million people, many of whom occupy make-work jobs like scanning luggage, or standing outside stations officiously demanding to see passports. India and China governments well understand Idle hands are the devil’s workshop and use their state owned enterprises to remedy this.

In my novel The Rising Tide, the UK government mandates “designated jobs” which are reserved for humans, and which businesses are not allowed to mechanise or computerise. Though the novel is sci-fi,  this detail isn’t made up; it is simply telling is as it is in Asia.

China differs from India because its leadership have a plan about how to modernise and are ruthlessly implementing it. In Yangshuo, we met a European businessman who’d settled in Guilin and owned a DNA testing company. Originally he hired other westerners, but slowly visas of less skilled staff were being rescinded and the workforce sinified. As with China’s nuclear power stations and high-speed trains, Western of Japanese designs are studied and then copied. Just because Trump’s a jerk, it doesn’t mean he’s wrong on everything. China allows favoured state owned companies to borrow on a massive scale so they can modernise. Maybe the Chinese economy will go belly up when the debt goes sour, but the infrastructure being built is real.

Indian government agencies seem to be in thrall to their political masters to such an extent they have lost sight of why they exist. A couple of stories illustrate the contrast. One friend who recently returned to India from Hong Kong told us about Mumbai’s new monorail which ran past her window. It was decades in the making, and the design so badly conceived the twists and turns in the track mean it can only operate with four coaches, too few for the volumes of people Indian public transport is obliged to carry. The advert below was the front page of a major Indian newspaper. Why should a power company operating in a south Indian state decide to give away electricity for free to farmers? And why pay top dollar to advertise its political scheming in a Mumbai paper?

While we were in India, there was a tragic fire in a swanky nightclub and 14 young people died. The rooftop restaurant had been warned many times it breached fire safety regulations, but no enforcement action was taken; the municipal authorities staff either bought off, or too lazy to do their jobs. (Curiously Maya and I were in the mills complex earlier that evening, but weren’t cool enough to get in.)

The Indian private sector is thriving. On the trip back I used a mixture of Uber-Pool, local railway, private bus and Mumbai local train. The Uber-Pool and private coach were realistically priced, punctual and offered excellent service. The coach company located its station next to the Expressway junction, from a restaurant it owned, avoiding the terrible traffic jams afflicting Indian cities, and ensuring a second stream of income.

The Indian malaise is wonderfully exposed in my friend Victor Mallet’s new book River of Life, River of Death that puts paid to any notion that a stalled economy at least provides the natural environment some respite. Instead, decades of incompetence and population growth have poisoned, over-abstracted and defiled India’s holiest river.

Will I go by train again in India? Almost certainly. The view all along the route is breath-taking. It traverses Navi-Mumbai, climbs 600m up the Western Ghats to the tourist town Lonavla before entering the Deccan plateau. The journey is slow,  3.5 hours to travel the 150 km, but fun. I love the samosas and cutlets, and conversations. Indian travellers are anyway curious, doubly so hearing my so-so Marathi. In three hours you can become curiously intimate with these strangers you’ve never met, and will never meet again. And as Victor’s book points out, during the 2013 Kumbha Mela, Indian civic authorities displayed their quixotic genius, organising a clean and safe celebration enjoyed by millions of people in the largest human gathering ever. There is still hope for India.