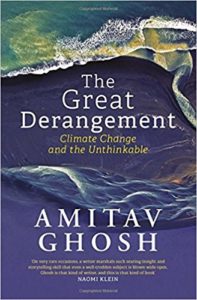 Ghosh’s non-fiction, short book on climate change The Great Derangement is a departure from his forte – the great Asian historic novel. It has all the classic Ghosh hallmarks with meticulous research: instancing the use of coal, oil and gas in pre-colonial Burma and China; a keen understanding of science previously revealed in his novel The Calcutta Chromosome; and the virtuoso use of language we expect from him.

The question the novel poses is why literature has been so perfunctory in its engagement with climate change. The evidence of clear-and-present danger from climate chaos has been with us for decades. As Ghosh observes, first hand in the case of a Delhi tornado, extreme weather episodes are becoming more common place despite their statistical non-likelihood. This could provide a human backdrop for any budding author of climate change fiction.

Ghosh’s explanation of literature’s silence is one of artistic viewpoints and time-scales. Classic novels have a small number of actors and the action occurs over periods extending from a few days to a few decades. Few novels attempt to handle people en masse or engage with time frames of centuries which is the horizon over which the impact of heightened greenhouse gas levels will fully manifest. Would Life in a Gulag been as successful as A Day in the Life of Ivan Denisovich?

But, according to Ghosh, few authors have attempted the great climate novel. Ghosh’s list – Atwood, JG Ballard, McEwan, Le Guin, Lessing – puzzled me because scarcely any of the books listed were about climate change, they were largely big literary figures’ journeyman efforts at dystopic/alt-future novels. For instance, JG Ballard’s The Drowned World (1962) quite understandably given its vintage doesn’t go into the science of why London is submerged. Lessing’s excruciating Canopus series uses sci-fi to unsuccessfully examine many social issues aside from climate change. McEwan’s Solar is a “McEwan” book starring a scientist working on solar energy. You could search and replace “solar” with “herpetology” and not notice any disruption to the plot.

Novels have engaged with climate change. My own novel The Rising Tide is more firmly rooted in climate science, in its consideration of the aftermath of collapsing Greenland ice-shelves, albeit fast-forwarded, seen through a teenage prodigy’s eyes. Kim Stanley Robinson’s New York 2140 writes of a post-sea level rise world which engages with how the human spirit will continue, after the climate fall. The YA book After Tomorrow talks about by refugee flows and monetary collapse triggered by climate change.

The last section of Ghosh’s book is a quirky textual analysis of two decidedly non-fiction documents produced in 2015, the hottest year on record, Pope Francis’s encyclical letter Laudato Si’ and the UN-FCCC’s Paris Agreement. Literature’s disengagement is all too evident 2016’s Booker was awarded to a book about someone selling weed and water-melons!

For someone like me who works on climate change and energy issues as an economist, policy wonk and author the book was a fascinating exposure to some different perspectives on familiar material. Ghosh’s main weakness was the incomplete efforts to engage with the sci-fi genre which is the style of literature that best engages with long term social issues.  Thoroughly recommend.