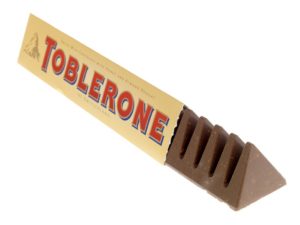 Earlier this week my son told me about an end-of-year costume party he was going to attend themed around all the horrors of 2016 and asked how he should dress. His friends would no doubt dress up as Trump, Farage and Boris Johnson. I suggested he should honour His Royal Purpleness, or perhaps  David Bowie – both great in terms of wacky clothes. Then, my son mentioned dressing up as a Toblerone to commemorate its tragic downsizing. I assumed he was being frivolous, but he insisted he genuinely mourned its shrinkage. He said lots of other confectionaries and snacks were doing the same thing.

In a sense, the shrinking chocolate bar does represent a truly existentialist threat to capitalism. Maybe I wasn’t properly appreciating the historical significance of its loss of heft. Every quarter poor Mondelēz International has to spin a yarn to its shareholders on how it plans to grow dividends. Ideally it would like to sell more chocolate at a higher price. But the company also owns Cadbury’s, Oreo, Terry’s and the handful of brands not owned by Mars and Nestle. As result of this concentration in the market, a proportion of extra sales will cannibalise sales of its own brands.

How to grow sales? The market for chocolate must surely be geographically saturated. I’ve seen its products in the tiniest village store in Philippines. I feel guilt every time I buy a medium sized bar of chocolate, so there’s zero probability of my upsizing to the larger bar, or heaven forbid buying two bars when I want a sneaky mid-afternoon snack. This is nothing to do with income or price elasticity. Doubling my income, or halving the price would not induce me to consume more. My body is rejecting the more chocolate with a Maslowian physiological insistence. Are we hitting peak chocolate? So what is capitalism to do?

So with stagnant sales all a firm can do is improve productivity or reduce portion size and hope customers don’t grumble. But productivity growth in manufacturing cannot keep growing indefinitely – factories have already been mechanised, supply chains squeezed. And the size of the product can’t keep on shrinking.

So maybe capitalism’s success at producing an abundance of goods, with a miniscule workforce through a handful of companies means that capitalism will eat itself. I wonder what will be left behind.

Perhaps my son should dress up as Fidel Castro.

One thought on “The unbearable lightness of Toblerone”