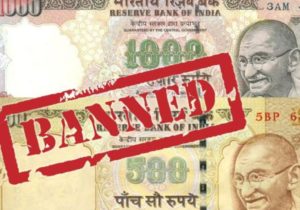 This startled populace, I am talking about, is that of India. Prime Minister Narendra Modi announced at 8 pm on TV that in a few hours’ time the ₹500 and ₹1000 notes (equivalent to £6.25 and £12.50) would no longer be legal tender. People had until the end of the year to deposit the rescinded notes into their bank accounts after that they’d be worthless. The veiled threat was that any deposits out of line with their declared income could attract the attention of the Indian Revenue Service. Around 86% of the value of currency in the circulation – around £177 billion or 9% of GDP – was being withdrawn. In his speech Modi said he had to act decisively. Removing black money from the economy would help eliminate terrorism and corruption and ultimately help the little man. Well maybe. The next two days the banks were closed as they took delivery of the new ₹500 and ₹2000 notes and adjusted their ATMs.

I had a surreal walk to work on the 9th November. Relatives from India were Whatsapp-ing about the demonetisation, not believing last night’s news; relatives from US West Coast were doing the same about the unfolding US elections.

Over Christmas, Maya and I spent a week in Mumbai and Goa and witnessed first-hand what was happening. First point: black money – the undeclared, un-taxed and in some cases corrupt cash economy – is a big problem in India and has been for decades. One person I spoke to – a professional working in interior design – says over his career forty percent of his earnings have been in the form of under-the-counter cash payments. Doctors, dentists they’re all at it. Like most Indians he did not wish to work with black money, it was risky and unseemly but he had no alternative: his rich clients insisted on paying in cash. Like an economy-wide game of pass the parcel no one wants to be caught holding a suitcase of cash when the music stops and the tax-man comes knocking. One relative who was selling their home was asked by the estate agent what their sought after price was in India’s dual currency system: the above-the-counter declared price and the under-the-counter supplement price. The agent advised a 2/3 white 1/3 black split. When my relative adamantly refused to provide a black money price, the estate agent said he couldn’t represent them. No-buyer would be prepared to buy a house just using white money.

In India accountants make a good living advising clients on how to launder their black money, it can be ferreted overseas, used to buy real estate. Gold is a good store of black wealth.

Black money hurts the real economy. It is untaxed: India has 1.3 billion people, but only 40 million income tax payers. Last year taxes on income raised a measly £35 billion. Contrast this to UK’s £165 billion income tax yield, despite India’s economy being only slightly smaller. Also black money greases the food chain of corruption in India. Twice during my infrequent visits I have watched relatives pay-off policeman grifting them for minor traffic violations. The policeman has to pay his boss, who pays his boss and so it goes on to the very top. The black economy can frustrate real economic development. Plans to develop the sorely needed Bangalore tube system have stalled. Government is serving compulsory purchase orders on buildings along the proposed route but only paying compensation on the declared white money property price, rather than the huge black money undeclared price. Powerful interests have stalled all progress. Because of Indian’s addiction to cash even Amazon has adjusted its normal rules and accepts cash-on-delivery as does its rival Flipkart. It’s not that India lacks debit cards. There are 740 million of them. It’s just people use them to withdraw cash rather than pay for things.

But will Modi’s policy work? The policy isn’t short of critics. They say the Government moved without sufficient preparation or warning. Too many people have been left without the means of exchange they need to go about daily business like buying food or getting paid. Their second criticism is it won’t touch the real kingpins of the black economy. Influential corrupt people have secreted their illicit wealth not as cash but in housing, gold or overseas.

It’s hard to dispute the lack of warning and the resulting ill-preparedness. Government took over 80% of the currency out of circulation. We could see the difficulties faced by legitimate small-scale merchants that don’t have point-of-sale terminals. During out visit ATMs were only dispensing ₹2000 per person per card per day – not even £25. 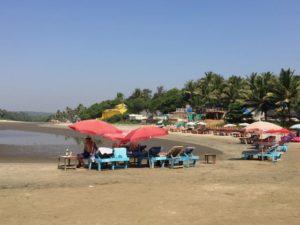 The photo is of a near empty Goa beach taken during the height of the high season. I bought a hat off a trader and he told me this was his first sale of the day, it was the middle of the afternoon. No one’s got cash to spend on these kind of things he explained. While we were there the queues for ATMs didn’t seem too bad. But we were able to get as much money as we needed out of our relatives’ local bank accounts. ₹2000 per person per card per day out of the ATM isn’t enough for a tourist.

Not everyone is suffering equally. My well-off relatives have a Marie Antoinette lifestyle quite apart from that lived by the little people. One explained she had no problem as her bank sent staff to their offices to cash cheques sparing the office workers from the long queues at bank branches. Blue collar workers don’t get that kind of service.

No-one knows whether it will succeed in flushing out the black economy and reducing corruption. As yet there is no evidence of widespread mass burning of illicit currency – so a lot of black money has probably been banked and people are hoping the Indian Revenue Service will be too busy to notice.

The real test will be if India is able to get people to declare their real income and increase its tax receipts. This will allow the country to pay its public servants and reduce its corruption. Also it’ll be interesting what happens in the real estate market now that the vast store of black-liquidity has been cancelled. Like the other great economic experiment that took place in the UK five months earlier it may be many years before we know the answer.