On 4th September, sandwiched between the Brexit vote and the US elections, Hong Kongers have the opportunity to vote in the four yearly LegCo elections.

Hong Kong’s democratic processes are a hangover from its colonial days – the first election took place in 1995 two years before handover. UK graciously offering HK a tantalising taste of democracy, after having denied it to for the preceding 150 years.

HK’s legislature currently has 70 members, half of them are elected from five geographic constituencies, and most of the rest either by business sectors (like industry) or professional bodies (like accountants), so-called “functional” constituencies. A myriad of different political parties are fielding candidates – with seemingly more parties than there are constituencies seats. The parties loosely fall into the pro-Beijing “Establishment” camp which controls LegCo and the pan-democrat “Opposition” camp. 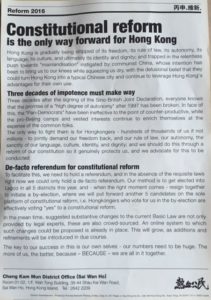 This year, the opposition is being split by the entry of eight, young localist candidates emboldened by the Occupy movement that want constitutional reform (which is code for the un-constitutional secession from Mainland). The well-known Umbrella movement leader Joshua Wong is still under 21, so cannot stand. You can get a flavour for their politics from the leaflet. They have a long litany of grievances against the Mainland: that Hong Kong takes in 150 Mainland immigrants a day (randomly chosen by ballot, unlike other countries that select by thickness of wallet), there is a weakening of Cantonese culture, particularly through greater teaching of Mandarin at schools and meddling in domestic HK politics by the central communist party. Their biggest fear is that HK will become just another Chinese city and lose its unique identity. At the time of writing one of the candidates had his candidacy invalidated because he refused to sign a form agreeing Hong Kong is an inalienable part of China.

Altogether 89 candidates are contesting the 35 geographic seats, and 65 candidates are contesting the functional seats. Two of my friends are standing in the election. One is already a LegCo member he’s a renowned pan-dem lawyer whose interests include environmental and social issues. He is seeking re-election for the accounts functional constituency. The other is a district councillor, originally from the Netherlands, but settled on HK for many years and who is making his second stab at the elections.

The candidates sometimes hang around the MTR stations. I spoke to Cheng Kam Mun one of the young localists about what policies he stood for aside from freedom from the Mainland, but drew a blank. His campaign is only really fought on one axis – opposition to Mainland China. This is a shame because there is so much more young politicians like him could and should get hot under the collar about. 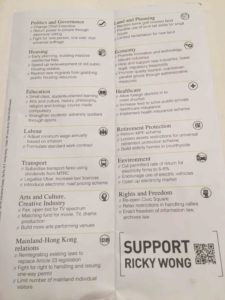 As someone who spends more time listening to LegCo debates than is healthy I have a lot of sympathy for the young people’s views that politics is not representing their interests. They characterise all villainy as emanating from Beijing, but there are baddies closer to home, too. A couple of weeks ago I listened to the debate on the medical bill. The Bill aims to make it easier for foreign qualified doctors to practice in HK, and also to increase lay representation on the medical complaints board. The bill was successfully filibustered by the “expert” LegCo member from the doctor’s functional constituency. Another debate on a proposed scheme to introduce premium taxi franchises was roundly attacked by LegCo members for upsetting the existing interests of taxi drivers and taxi license owners. The least bland politican is “Long Hair” Leung Kwok-hung who has been almost impeached, physically thrown out of the chamber and imprisoned for his implacable views but who genuinely cares about worker rights and minimum wages and is one of the few people that visibly represents the common man in the chamber. The other person to look out for is Ricky Wong. He is a successful businessman, more Bloomberg than Trump, and is running on a get rid of CY ticket but also favours Hong Kong business becoming more hi-tech and competitive, and breaking the grip of the current business interests.

I asked young members of my team  famous people they would most like to have a heart-to-heart conversation with. Their choices were mainly global. One person said Chris Patten. The reason they gave was because they wanted to hear how Patten made decisions especially how he traded off different people’s interests. A second colleague said they’d love to spend time with Bill Gates or the person that set up Facebook. Both these figures had been at the heart of technologies that so changed everyone’s life. A third person said Tsai Ing-Wen, the then President–elect of Taiwan. Tsai is the first female head of state in Taiwan, and perhaps also the Sinophere.

Anyway I’ll simply be observing the elections. Temporary residents like me aren’t allowed to vote.