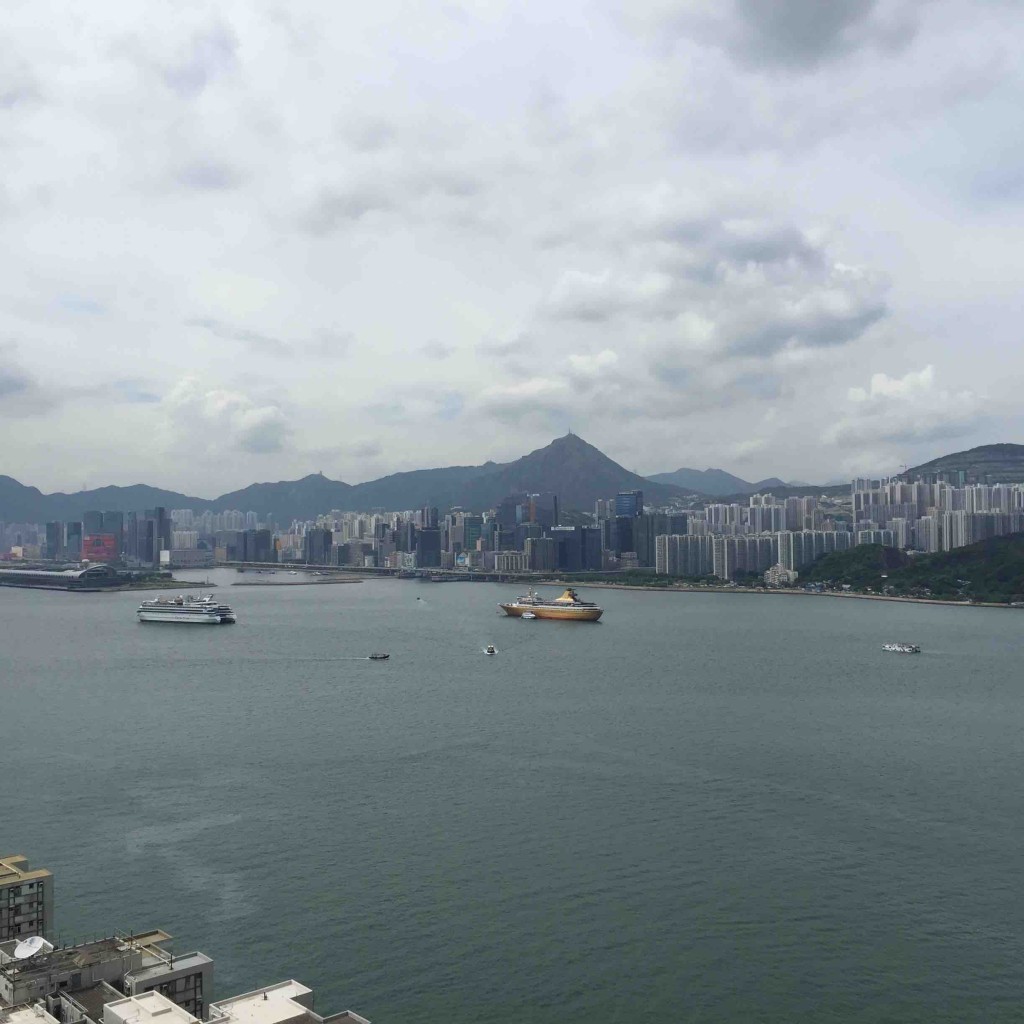 Our new flat is on the 32nd floor of a 63-storey block. This is the highest I have ever lived by a margin of 30 floors (unless you count a week in the Algarve where I vaguely remember needing to take a lift to access our room).
We moved in over a month ago and the view from our flat still takes my breath away. I wake up to see some of the world’s biggest cruise liners glide into the cruise terminal juxtaposed with sampans quietly wending their way across the harbour. Looming behind all this is the 602m Kowloon Peak barely a kilometre from the sea.
Life in this sort of flat is a very different life to what we were used to. Exiting the building can take five minutes, with numerous doors and two lifts to navigate making you more inclined to hunker down at home once you’re inside. It’s small: 670 sq. feet, which is still large by Hong Kong standards – the average flat size being 450 sq. feet.
The atmosphere is like that of a holiday resort – the development boasts a shaded 25m all-year swimming pool, massive gym with sea views, café, Jacuzzi, BBQ space and lots of rooms for hire: bowling, snooker, events and music. While there’s no green space within the complex there are two municipal parks nearby. We do have an elevated walkway with exercise equipment and a tiny allotment for children to grow flowers and vegetables. The Internet speed is a blistering 50Mbps. The ISP was apologetic it couldn’t deliver the 1000Mbs available to others in the building. It had to restrict speeds for new customers because of a local capacity constraint. The building is popular with expats from Japan and Korea as there’s a Korean school just opposite so there is a great variety of excellent restaurants for the well-heeled executives. There’s quite a few ABC (American Born Chinese) judging by the accents. So far we’ve not properly met many other people and I still wouldn’t recognise my neighbours. Despite the having so many people packed together, it feels an anonymous place to live. Developments like this are sprouting up all over Hong Kong and other big cities.
Tower blocks are more made from electricity, than from matter. Our building has four high speed lifts, pumps to supplement the standard head of pressure, so drinking water can attain the building’s 210m summit, air conditioners to shed the heat gained from its acres of glass. Our electricity supplier, Hong Kong Electric, has maintained a reliability of supply of 99.999% since 1997 – which translates into around three minutes of unintended break in supply a year.

People sometimes compare Hong Kong’s appearance to the set from Blade Runner. But this is inaccurate, far too dystopic. A better Philip K Dick comparator would be the anaesthetically clean cityscape from Minority Report. Why are such vertical cities catching on? And how green are they?

Hong Kong has built vertically because land is scarce, developers have cheap access to capital and the electricity supply is highly reliable. For the other cities seeking to copy Hong Kong’s upward trajectory, reliable electricity is the most difficult precondition to meet: capital is anyway mobile (Hong Kong’s developers are turning this same trick in many other cities) and land scarcity is happening everywhere – the automatic consequence of urbanisation and local politicians natural aversion to annoying their current stable of voters.
That constructing tower blocks is favoured by developers should surprise no-one. Hendersons, the developer that built our home, says in its annual report: “Our strategy is to acquire sites with good potential for future value enhancement through development density intensification.”
And have they intensified! The tactic of developers is to get hold of prime land – either prising it off the people in the pre-existing 5-10 storey walk-ups, getting Government to create it afresh through land reclamation, or take over some green space – then quickly build the new tower block. Our development has 2000 flats spread over its five buildings. Looked at from Google maps its footprint is a mere 5000 square metres. By way of contrast our home in London, population 2, had a footprint of 100 square metres, and Highgate ward where we lived has a population of 10,000 and an area of 3,000,000 square metres (admittedly including quite a bit of Hampstead Heath). So my block is something like 40 to 240 times more densely populated than where we lived in central London. Land prices in Hong Kong are higher than those in London but not that much more expensive. The insanity that is the Hong Kong property market means that our flat in Hong Kong costs around 50% more than our home in UK despite being a third of the size and using around 2.5% of the genuinely scarce commodity – land. So the value-added created by the massive intensification of land use from high-rise living is not split between the developer and the resident. It’s shared between the developer and the Government.
Developers make a killing. Hong Kong has 55 US dollar billionaires compared to UK’s 53. The founder of Henderson’s is number two on the Forbes’ Hong Kong list with US$25billion. Number one, $33 billion, is of course Li Ka-shing who made his initial fortune from Cheung Kong property, Hong Kong’s biggest property company in the 1970s. His wealth now spills over into every other sector (like UK’s Superdrug and London’s electricity network company). Converting land into gold has proven a highly reliable form of alchemy. It magically transforms Hong Kongers’ prodigious work ethic, the increase in population from net Chinese migration and the gains in productivity from technological change and converts it into the wealth for the lucky few who have cornered the property market.
Government makes a killing too. Through the Land Premium charge developers have to hand over 80% of the gain in value from the intensification of land use to the Government. Last year the charge raised HK$84 billion, around two thirds more than the Government earned from salaries tax. Following the 2015 Budget the newspapers mocked the finance secretary for once again getting his budget forecast wrong. But the similarity with George Osborn ends there. The hapless minister’s error was for the 9th year running to underestimate the size of the budget surplus – HK$64bn instead of HK$9bn resulting in a giveaway budget cutting income tax on the lowest band of earnings.

Other cities are catching the high rise bug. Our building is the 51st tallest in Hong King, at 209 m. The Belchers estate in the west of Hong Kong island used to be the world’s tallest residential block, at 221m, until 2001 when Dubai started the frenetic development of its marina. In the last 15 years the world has gone on a high rise building boom and the tallest residential block, still under construction, will be 541m tall. Hong Kong used to be leader in building tall but now this model is being copied everywhere.
Are high rise buildings green? Well certainly they can be, especially in the hands of the Chinese. In the video a 57 storey ultra green building is constructed in just 19 days. It has walls with 20 cm of insulation, quadruple glazing and uses trigeneration to produce heat, cool and power. It is built off site to speed up construction, and reduce onsite pollution, risk to workers and noise. Carbon dioxide emissions have been cut by 80%. 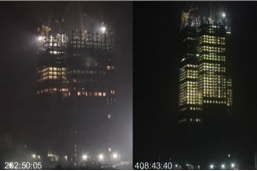 China is making a reasonable claim to hard wiring resource efficiency into its every endeavour. But here in non-dirigiste Hong Kong I’m not sure. The developer builds to the minimum standard set by Government and no more. Double glazing which could reduce the need for air conditioning is unknown and even a simple technology like low-E window panes to reflect the hot wavelengths is uncommon. If you want a good laugh about lax building codes look like take a look at Hong Kong’s 2012 Building Energy Efficiency Ordinance which sets no standards at all on the building envelope for homes, and a few weak standards on air conditioning, lifts and lighting circuits. Buildings rarely have verandas or overhangs over the windows to reflect the bright sunlight. Instead air conditioning thunders away all summer. Government has just introduced a new requirement in April this year that residential buildings that want to apply for special concessions for green / amenity features have to be better insulated, and any area of verandas will be disregarded from the maximum floor area the developer is allowed to build on the site. But with just 3% of homes being built every year it will take decades for the energy efficiency to improve.
Energy efficiency standards are lax for appliances too. In a recent trip to the electronics chain Broadway’s, every appliance marked as grade 1 on the energy label. However my A+ fridge in UK uses just a third of the electricity of the grade 1 fridge here in Hong Kong. The current energy label standards (being revamped in November this year) are woefully lax. 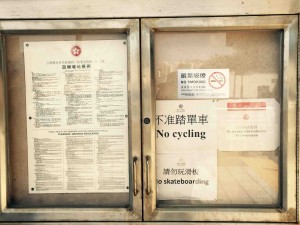 High rise living is green but not because high rise buildings are intrinsically less energy intense. Small compact flats still need tough building codes to make them green. The big difference in compact living is that it radically changes the economics of mass transportation. Public transport buses as well as the MTR have high occupancy and as a result high frequency creating a virtuous circle. There are two floors of car park in our block but this isn’t many given the size of the development. Many of my colleagues don’t know how to drive, never mind don’t own a vehicle. If you only Hong Kong could learn to love bikes. The picture above is taken from the entrance to the wide seaside promenade next to my flat!

2 thoughts on “The High-Life in Hong Kong”