Swimming in the local municipal swimming pool is not usually considered a hazardous sport…but a Saturday morning dip in Kowloon Park should be. Once in the water all Hong Kong’s usual conventions sanctifying personal space cease to apply. Kamikaze fifty year olds hurl themselves in the water. Lean nimrods in Speedos juggernaut through the water unswerving, their plastic heads retracted . There’s giggles from women chatting around the sides of the pool using the water just to cool down. There are relatively few children in the pool they’re too busy cramming for their next academic hurdle. 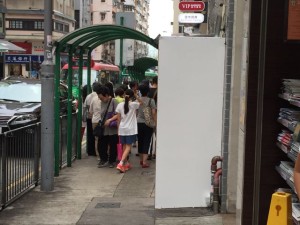 Keeping fit in Hong Kong can be a challenge. Because the city has been carved out of a mountain it’s hard to walk any distance without hitting some giddy gradient. The streetscape to the left, taken just outside my old house in Kennedy Town, shows the challenge of  jogging or simply walking on the ribbon of land around the harbour. Walkers are fenced in on the narrow pavements and jostle for space with street furniture, shop overspill and construction work. And Hong Kongers  umbrellas are as multifunctional as Douglas Adams’ towels –unfurled in fog, rain and bright sunshine alike – staking a half metre square claim on the pavement. Umbrellas usual depiction is as the mark of democratic protest, but to me they signify a threatened jab in the eye despite my undemanding stature. It’s rare to see children playing in the parks or streets. The city is asking itself soul-searching questions why its children are measurably weaker than other southeast Asian countries’, including children from China. The girl below is  a delightful exception. What terrible child exploitation and on a bank holiday!

So how come Hong Kongers are so skinny compared to westerners? The secret is of course they eat less, and avoid carbs. Portion are small. In Pret-a-Manger the standard sandwich size is half that in the UK. In Cantonese meals rice is served at the end, as an afterthought and largely thrown away. There’s little use for wheat – bread is sold by the half dozen slices – often with the crusts shaved off. I’ve been served ‘All-day breakfast’ with just half a slice of bread.

Lack of exercise isn’t a problem for seniors. Perhaps its because they spent their formative years in a different era that the parks, especially in  early morning, are filled with septuagenarians walking, stretching on the kids climbing frames or doing their Tai Chi. For the first time in my life I can go for a jog in the park and enjoy that giddy feeling or overtaking someone else. 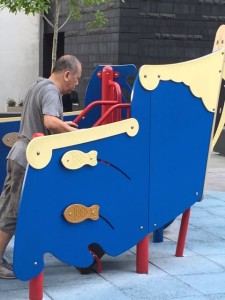 Luckily the space that has been designated for sports activities – the swimming pools, gyms and sports fields run by Hong Kong Leisure and Cultural Services Department are exemplary. For just HK$17 (about £1.50) you get to swim in spotlessly clean, Olympic size swimming pools perched on some of the most scenic real estate in the territory: overlooking the harbour or tucked in the parks. With public services so good the policy issue becomes how to ration them? In the case of Kowloon swimming pool on Saturday morning the answer is you don’t; thankfully the pools on Hong Kong Island are much less busy. But accessing the gyms or the Government organised sailing or windsurfing facilities means having to attend the compulsory half-day training course. These are held once a month and there’s a waiting list. The other gym option is the outlandishly expensive private gyms (none of which have swimming pools) aimed at the rich and chic.

Our bikes arrived with our luggage and I’ve started to cycle the 3km distance from our new home to the office. Saying that Hong Kong island is not designed with cyclists in mind is like saying Ikea store-designers do not plan for their customers to leave with just the one item they wanted. The whole of Hong Kong Island has been designed to either infuriate or kill cyclists. My Homerian commute involves first exiting the building, through a dozen fire doors and lifts, to a street system where drivers hoot you every few seconds, outraged or perhaps terrified to share space with cyclists. There have been cyclist 46 deaths so far this year – quite incredible given how few cyclists there are. It’s actually possible to walk to my office off-road on a gorgeous sea promenade through Quarry Bay park, through the huge Taikoo Shing housing estate, past sign posts that angrily warn: “You will be prosecuted for cycling “. In the UK, one cyclist I know’s favourite hobby is zipping through red lights and sail over paths he/she’s not supposed to. In Hong Kong, where they don’t have proper crimes, jaywalking and cycling on footpaths, relatively speaking, are proper crimes. One of my more Taoist colleagues, sensing my frustration, asked the profound question, do you cycle to work because you want exercise or because you want to reach here. What would Yoda have said to that? She answered before I could slip in “both favour I would” saying, “For exercise there is the gym, for travel there is the MTR or bus”. And in a way she’s right. Hong Kong’s success is down to its efficient ability to cater for conformity,  plurality of want is much harder to accomodate.

Another option to become fit I am seriously considering is eschewing the use of lifts. That’s not as dumb as it sounds. My office is on the 8th floor and my new apartment is on the 32nd. Quick maths tests – how many floors would would I climb everyday if I abandoned the lift ? Wrong. It’s important  to understand floor numbers here are ordinal rather than cardinal concepts. Most blocks miss out floors ending with a “4” (deemed unlucky). My office block misses out 4, 13, 14 15, 24; what would Fibonacci make of that? My apartment block starts counting floors at 7. There’s a story about a developer getting into trouble for selling a 68th floor penthouse in a 46 storey building. Floors 40 to 59 were missing – I presume because there were insufficient buyers and he had some high rollers on his back itching to sue if they didn’t get their pre-paid penthouses pronto. 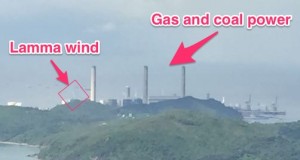 The other way of keeping fit is hiking on the trails. But in May with the temperature hovering around 30ºC from dawn to dusk this is getting hard. The last time I walked up Victoria Peak from Kennedy Town I took this photograph of Lamma Island. I am currently mainly working on Hong Kong’s electricity market reform. The weirdest thing about the energy policy here, for a Londoner, is that 80% of Hong Kong’s electricity is generated within the territory. The island of Lamma just off the Hong Kong Island and easily visible from the Peak provides a quarter of the territory’s electricity. The balance between fossil fuels and renewables is all too visible in the photo. The 800kW wind turbine is barely visible next to the  4GW coal and gas plant. There’s also a small 550kW solar PV also on the site which is near invisible in the photo and equally absent in the output statistics.

Maya and I were glued to our phones on the Friday of the UK elections. Being six hours ahead the results came in over the course of the day. Maya was working in the British Consulate and she and her colleagues were all crowded around the TV, I was in my office patiently explaining about the UK election process and why was there a Green Party. Hong Kong will be holding its district elections in November this year, but few of my colleagues are registered to vote. When the districts were last contested, in 2007, only 1.1 million votes were cast from an adult population nearing 6.2 million. Everyone in Hong Kong is allowed to vote except foreigners, prisoners and the small garrison of the PLA. There are 412 district councillors in HK’s 18 districts councillors. They have similar powers to those in UK– bread and butter issues: local bus routes, social housing, waste collection. The noisy pan-democrats that are lobbying so hard for changes to the election for Chief Executive, got 40% of the vote compared to 55% for the pro-Beijing parties – mainly in the wealthy and westernised districts. It will be interesting to see whether this shifts in a few months time.

One thought on “Keeping Fit in Hong Kong”