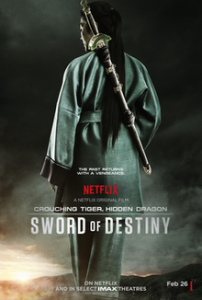 Unlike most of its reviewers I watched the second instalment of the Sword and Calligraphy epic last week and loved it. It’s shorn of the original director Ang Lee and star Hong Konger Chow Yun-fat, but gorgeous Michelle Yeoh is in. If you like fighting scenes that wouldn’t look out of place in the Royal Ballet or Cirque du Soleil and a cast of chivalrous warrior-clerics you’ll enjoy it too. My favourite scene was a fight on a frozen lake. The thought of being trapped under ice scares me silly but as these guys keep on with their pirouetting flying side kicks in the moon-light as the ice collapses under them.

The film debuted not in the cinemas but on Netflix (and also a few IMAX screens). Netflix entered the Hong Kong market just a few weeks ago and is having difficulties getting subscribers. None of my co-workers  see the point of subscribing. Most of the shows Netflix subscribers from USA and UK expect can’t be shown as the Asian rights have been bought-up some other companies. So the schedules are still a little thin. There is also a longer term cultural challenge for Netflix. Colleagues are just so used to downloading free films that the concept of paying for content genuinely confuses them.

The day after the Sword of Destiny’s Netflix debut was announced US’s largest cinema chain Regal announced they would not screen it. The next day the other big cinema chains followed suit. The economics are fascinating. Monthly subscription to Netflix is about the same price as a single adult movie ticket. The cinemas have declared war on Netflix. So far Netflix has free-ridden on the movie companies buying content for cheap, since the costs of production have already recouped from cinematic or TV subscription audiences. Whether its business model can withstand the costs of the originating high-cost material will be interesting. As Sun-tzu points out in Art of War – successful military campaigns require limiting the cost of competition and conflict. Perhaps originating new movies is too pricey a tool!