I spent Easter holidays cycling in Kaiping, Guangdong – a city of 0.7 million which was scarcely known by anyone at work. China is a hierarchical place and cities are categorized as tier 1, 2 or 3 depending on their significance. Kaiping is less a tier and more an illegal extra floor. 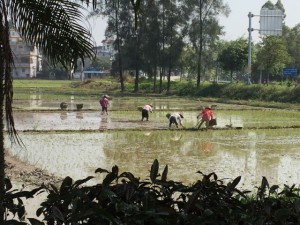 When I told my co-workers about my plans they feared for my life. Hong Kong is such a safe place it has warped people’s concept of danger. So far this year HK has had two murders, 12 suicides, and one Darwin Award entrant short-listed for falling 400m off Lion’s Rock while taking a self portrait. No one is attacked in HK; harm is largely self(ie) afflicted.

The biggest danger I faced in Kaiping was my tendency to drift onto the wrong side of the road while cycling the quiet country roads.

Kaiping’s correctly famous for its Diaolous. These quirky fortified houses look ancient but are less than 100 years old. There are around 1000 scattered around the county. Four clusters are in particularly good nick all less than 20 km from Kaiping – they have collectively been designated as UNESCO sites.  Kaiping and nearby villages were used as a location for two well known Hong Kong movies: the beautifully shot Grandmaster about Ip Man, Bruce Lee’s Kung Fu teacher, and A Better Tomorrow once Hong Kong’s biggest grossing film. It also has familial connections to many western countries as the county was a major source of migrants fleeing the bandits, recession and opium addiction that marked the end of the Qing dynasty at the turn of last century.  Their remitted wealth was used to build the Diaolou a fascinating series of follies, which are so numerous they became the vernacular. Its other claim to fame is it’s the sanitary wares capital of the world. 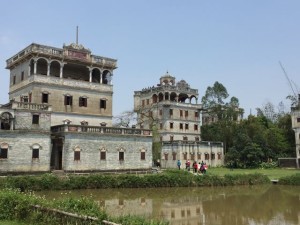 I stayed in the imaginatively named Kaiping Hotel. It was brilliant – the bathroom was bigger than our Hong Kong flats bedroom. It of course had exemplary sanitary-ware. I had an entire western restaurant to myself and was serenaded by a sultry jazz singer who crooned Nora Jones at me.

China’s got many interesting smaller cities like Kaiping, where the old hasn’t yet been pulled down and replaced. Well worth a visit.