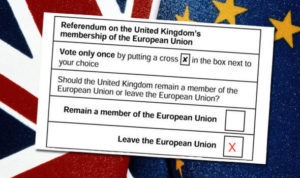 I posted my “Leave” vote on Tuesday. Thanks for the tens of responses to my earlier post people sent me either by email,  posted on Facebook or on this website. All but three counselled Remain. I was, in fact, going to vote “Remain” right until Monday evening. This was a mainly through reading the anti-smoking campaigner Clive Bates’ cogent article . His basic case is: no matter how much you despise the EU (and does he despise it!), leaving it you remain exposed to its idiocies without any ability to improve it. Also the style of Brexit that Boris Johnson will adopt, should be become PM in a few months’ time, would – pandering to CBI and other powerful interests – be the Norwegian option. So Clive’s solution is to Remain and be the permanent grumpy sod that stops any further craziness taking place. Trouble is, that’s exactly what UK officials have been trying to do for five or six years, and it hasn’t worked.

And I don’t think the Norwegian option is going to fly with UK voters. I have no idea what the UK settlement with the EU will be like, should we leave. But I doubt if it’ll be like Norway’s. Like Tolstoy says: “All happy families are alike; each unhappy family is unhappy in its own way.” We have to negotiate our own divorce terms. Even if Boris personally might have no problem with uncontrolled flows of workers from other EU countries the people that voted for Brexit won’t be able to accept it. I hope the accommodation on trade in goods looks a lot like now, for  a few years. Firms in the EU and the UK will want to maintain trade links. So yes, many in the EU might want to give us a good pistol-whipping – but devising a harsh pistol-whipping takes more effort and skill the the EU Commission can realistically muster.

So what made me change back to “Leave” at the last minute? Three things:

I enjoyed reading The Labour Case for Brexit. (Incidentally if you never experienced a political vacuum then take a look at the Liberal Leave website: remarkable not in what it says, but in that it exists at all.) The Labour Case has good essays by Gisela Stuart who was involved in negotiating the Lisbon Treaty back in the day, and Bryan Gould a New Zealander and former UK politician. Stuart argues that a vote to Remain will be interpreted as endorsement of the EU’s current agenda for deeper political and diplomatic union and that a remain vote is actually a vote for a much expanded role of the EU. Gould argues that the EU through focussing so much at the internal market, has neglected outside commercial opportunities – a dumb tactic given the Asiatic shift of the world economy. There’s also an interesting article by Roger Godsiff about how the rules on workers’ rights in the UK and how with the exception of rights for part-time workers all were initiated in the UK before the EU, or there is no EU requirement for them.

Second source was the Vote Leave site. This isn’t the most edifying of resources for the undecided but there are some interesting stats on the shrinking share of the EU in terms of global GDP and its faltering efforts to conclude trade deals.

The third source was nothing to do with the Leave campaign but a depressing email I received on the Consumers International mailing list about the anti-democratic capitulation of the EU in its deals with big business. The issue is endocrine-disrupting chemicals; these substances are found in pesticides and are added to plastics to make them soft. They are linked to low sperm count, and certain cancers. There has been an agreement since 2013 to ban EDCs and the Commission was tasked with creating the list of banned substances. And then it stalled. Industry has provided a sacrificial list of “low potency” molecules it is prepared to see banned which excludes endocrine disruptors it wants to continue selling. They’ve hired fake experts to make their case. The same tactics the tobacco lobby used to halt regulation of cigarettes. The impact assessment containing the evidence is secret, even member state Governments aren’t allowed to see it. At the moment we have the unedifying site of the unelected EU Commission being taken to court by France, Sweden and the EU Parliament for failing in its duty to openly debate with stakeholders and regulate business in the public interests.

In a way this episode illustrates what’s good about Europeans, and what’s wrong with Europe. I am glad that France and the Scandinavian countries have been so active on this issue within the EU. Their behaviour shows the readiness of progressive Governments to react swiftly to challenges thrown up by science and politics. But equally it’s dismaying to see the slowness and complacency of the EU institutions in responding to the needs of its people, and the larger failure of democracy and civil society to engage with Brussels. We are not sufficiently European in our identities to be governed at the EU level. And in my opinion, until that changes, the EU should remain just a free trade area and limit its activities to setting EU wide standards.

3 thoughts on “Why I finally voted leave”