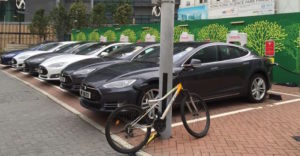 The first Tesla I saw was wrapped around a lamp-post near my home in North London. The attending, couldn’t-be-more-amused, policeman, said the owner’s wife had taken it out for a spin not appreciating the beast’s acceleration. I couldn’t work out from his poker face whether he was trying to be funny.

I took the photo of Tesla’s high speed charging station at the Science Park in Shatin. The power lurking underneath those hoods is astonishing. Each Tesla Model S is packing between 328 and 532 horse-power, my mountain bike parked alongside is just 1/3 hp.

Last year 2200 Tesla Model S’s were sold in Honk Kong, about half of all the electric cars and quite probably 4%-5% of all private car purchases last year. Hong Kong’s excellent public transport system means that private cars are a luxury rather than a necessity. One important reason why the Tesla is so successful over here is that electric vehicles enjoy relief from Hong Kong’s progressive first registration tax on cars which starts at 40% and rises to 115%. The other big perk is that Tesla / HK Government has installed free superchargers, like the one in Science Park, at 10 locations around Hong Kong. Also, even the most nervous driver will find it  hard to get range anxiety about the battery going flat between charging points when the longest distance it’s possible to drive before you either fall into the sea or hit China is fifty miles.

Not visible in the photo is a long line of Tesla’s queueing for their free juice. Maya and I asked the person at the head of the queue why they bothered to wait for a recharge. Surely after forking out more than half a million dollars (HK) to buy the thing – he could afford to pay for the electricity. The impossibly handsome, impeccably groomed, and globally accented young owner shrugged nonchalantly. His apartment manager like many others in Hong Kong did not allow residents to use the charge vehicles in the garage citing the ubiquitous, and infinitely flexible excuse Health and Safety. Anyway it wasn’t so bad waiting 20 minutes in a queue with excellent on-board entertainment and a nice cup of coffee. What he did begrudge were people who left their car charging in a bay and gone off for a meal. Their Tesla was near-fully charged in just 20 minutes.

Poor dear – I thought. I’m sure even private Learjet owners must’ve their grumbles.

2 thoughts on “What do you call a collection of Teslas?”