After months of relative solitude Maya and I have had a series of visitors over the past few months. After school broke up Satish came for three weeks, Ayeisha came in late August and Prabhat and his wife Judith in September. Skype and Facetime is all very well, but you don’t realise how quickly your children grow from a four inch screen. 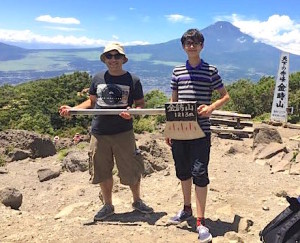 From a certain angle, Satish now appears taller than me. From any bathroom scale, I still appear heavier than him. This is the two of us on Mount Hakone with Fuji 25 kilometres behind us. The crater on Hakone has been murmuring since April, but on June 30th (about five weeks before we arrived) there was a small eruption of ash and steam and it has been spewing ever since. We all dutifully walked up to the candela to see the lava but the Japanese are nowadays as health and safety conscious as the Hong Kongers and the area was all taped off. The beautiful resort was almost empty and the three of us had a 600 seat Mississippi paddle-steamer to ourselves.

I’d been to Japan once before, in mid-90s just when its quarter century long economic ‘malaise’ started. You all know the story – low growth, ballooning Government debt (largely owed to its own citizens so IMF has demurred from doing a Greece on the country), ageing and shrinking population (1 million fewer people each year from now on), and an endless series of Governmental macroeconomic defibrillations to get spending going. I had expected the country to resemble some economic ghost town – another France, except with decent food. But it wasn’t like that at all. It’s the most fantastic country. The shrinking population of young (there are almost twice as many 60-64 year olds as 0-4 year olds) have ceased to worry about getting a salaryman jobs since there are none, and seem content to mooch around on bikes and hang out in excellent coffee shops and cheap cafés.

The Japanese put thought and pride into the most mundane objects and everyday places. Look at the first two pics below: the first is an immaculately manicured and reasonably priced restaurant in Uneo, the second shows the torrent of technology bestowed into this renewably powered, LED lit, heat-pump cooled beverage dispenser in Ikebukuro. But the third pic shows Japan getting it horribly wrong, demonstrating why middle age men should not run records labels. It was taken in a pub in the basement of the Sony Building in Sinjuku. Last time I went there in the 90s it was a temple to Sony’s creative fizz. Now all six floors were themed around Maria Carey, linked no doubt to her recently signing to Epic records. I am not joking – look at the album covers behind and the beer mat! I wish her better luck on Epic than enjoyed by Michael Jackson and Witney Houston. 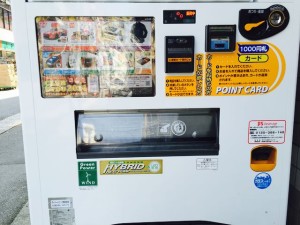 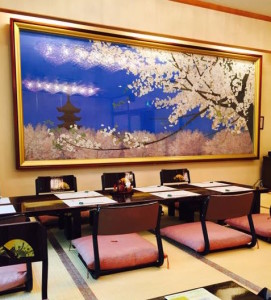 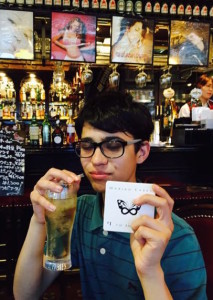 There’s a great book “Bending Diversity” about Japan by David Pilling written in the aftermath of the Tsunami showing how modern Japan copes with the its legacy of being the first non-Western developed country, being reviled and still living down its role before and during the Second World War and its stoicism in the face of its vulcanic and typhoon prone geography.

In August Ayeisha briefly visited. We all went to the excellent Nan Lian garden and then a Venetian piazza in Macau complete with gondolas. 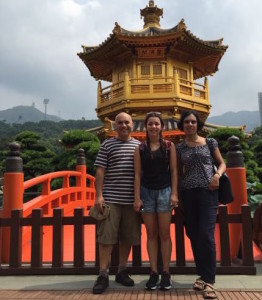 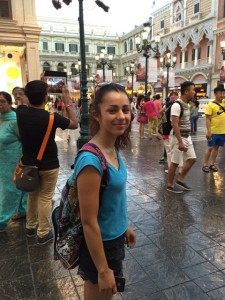 Macau is a weird place. It’s about an hour’s high-speed boat ride from HK and soon to be linked to HK by a 50 km bridge. It is now, like Hong Kong, a Special Administrative Region of China. It was administered by the Portuguese between 1557 to 1999, a far longer span than the Brits occupied HK. It’s much smaller than HK. At the moment its reported to have the second or fifth highest GDP per head in the world depending on who’s counting. But much of this economic activity is in the gambling sector. The gamblers are drawn from highly regulated Mainland China and Hong Kong, but Xi Jinping’s crackdown on corrupt officials has resulted in a massive drop in tourist flows. Much of the ‘domestic production’ anyway gets whisked away by the owners of the huge casinos: Las Vegas Sands who own the Venetian, the Hong Kong listed Galaxy. There is still some culture here – a rather good museum and the poetically superficial façade of the St Paul’s church, which echoes the relative importance of the Church to Mammon. Macanese food (in Hong Kong) is great but Ayeisha and I struggled to find a Macanese restaurant on the gambling island of Cotai. 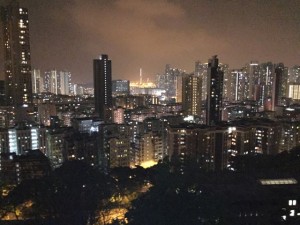 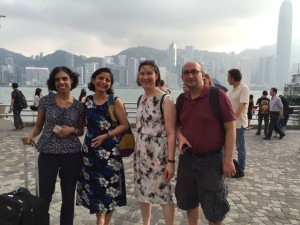 On the Saturday before the mid autumn festival we climbed a small hill in Kowloon, with a band of couch surfers, and watched the full moon. We fingered Hong Konger’s beloved moon cakes and discretely threw them away when backs were turned cursing their calories and awful taste.

Everyone’s gone back now. Maya wore jeans over the weekends. Despite my higher-spec insulation, I will only be able to sustain shorts and T-shirts for a couple more weeks. As Ned Stark so ominously and repetitively points out in Game of Thrones – “Winter is coming.”