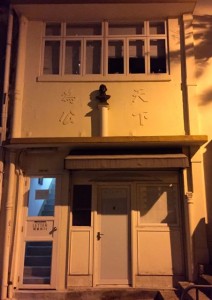 Prashant in Hong Kong….for half of you this will be a “What the Hell….”moment and the other half will be wondering why it’s taken me so long to write. This is my fifth week away from the UK. I’ve been working for three weeks but more about that in a later letter.

I’m staying in a small studio apartment in Soho….the HK equivalent to London’s Soho I guess. My home, unusually for somewhere so central, is just three stories and there’s a bust of Sun Yat-Sen, the famous Chinese nationalist over my door.

It’s quite possible this is the HK equivalent of a blue plaque since tourists are constantly gawping at my room. One even peered in and asked why I lived here with my curtain open. “Was I an artist?” she asked. Do I look like Tracie Vermin?

The neighbourhood is very westernised. Nearby there’s an M&S Food store stocked with air-freighted ready meals a few doors from the Yorkshire Pudding boozer. I do mean Western rather than British. Just recently the newspapers announced the number of French people in Hong Kong exceeded the number of Brits. I think we have Sarkozy and Hollande’s mismanagement of the French economy to thank for the diaspora. Anyone who’s strolled around Hampstead Heath will understand when I say how much this makes me feel at home. 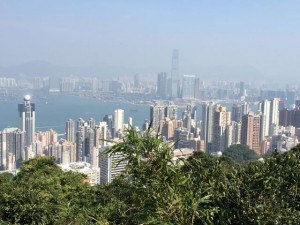 Hong Kong is very steep. My phone tells me I walked the equivalent of forty flights of stairs climbing up Victoria Peak. I live close to the escalator system. This consists of half a mile of linked walkways that climb from sea-level to the Mid-Levels. It’ll take you about twenty minutes to be lifted their full 135m rise. Everyday 50,000 use the system. After the escalator there’s another two kilometres of steep walking to leave the city to reach the Peak. But the views at the top are spectacular. Of course life isn’t just about views. There’s of course a shopping mall at the top including some surprisingly good value clothes shops. 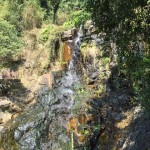 But the most surreal thing after the climb is the other side. You hit the wilderness of Pok Fu Lam country park. This isn’t country park meaning a designation of land that allows rich squires to protect their views and maintain the sanctity of their golf courses. [Though HK does have its share of golf courses and squires.] This is proper wilderness…they’d be tigers here if they hadn’t all found their way in the cooking pot. This photo was taken less than forty minutes walk from where I live. The Big Wave Bay beach scene overleaf was taken a short MTR and bus ride from my house. The beach comes complete with surfing Ozzie’s. 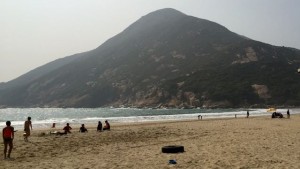 I haven’t really worked out what takes Hong Kong tick. It feels preposterously prosperous. There’s little litter, people are polite and they queue nicely for the tube even in the rush hour. And the public services work well. To give an example, like everyone else, I have to obtain a HK Identity Card from the Immigration department. The website is easy to navigate, and it takes ten minutes to fill the forms. I was offered an interview slot in the early afternoon in a conveniently located office (as opposed to Croydon’s Lunar House). I took a flask of tea and lots of reading and told my colleagues I was unlikely to make it back to the office. But I was in and out of immigration within 20 minutes. In that time they undertook two speedy interviews, scanned my finger prints and took my photo. They promised my photo ID would be ready in a fortnight – and I am sure it will. My medical check was similarly efficient. 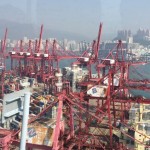 So things work. But what do people do in this tiny 1000 square kilometre state? There’s no agricultural or extraction sector, the territory’s people are too highly paid to support manufacture too. Instead, the economy is dominated by trade and professional services and the property market. The photograph shows cranes loading piles of containers that look like lego-bricks onto lines of impatient ships. But each brick is a 40 tonne container. “Made in China” is despatched from Hong Kong.

I have never known anywhere with more estate agents than Hong Kong. No one, except for rich speculators, can afford to buy in HK – so everyone rents. Estate agents thrive in this environment of one-year leases, since they CAN help themselves to one month’s rent as commission. And of course there’s shopping. Miles of it, layers and layers of it because HK is fundamentally a 3-d city. Megabox is a 19 story building with several floors of clothes and other high value impulse purchase shops, followed by several levels of IKEA, a floor of cinema, an ice rink, then foods courts and a gym at the top. The photograph was taken from one of the Megabox’s terraces and shows the Megabox’s antithesis HK’s largest zero carbon building. This has building integrated and non-integrated PV panels, a trigen power plant to provide cool air (fuelled by biogas) when the natural ventilation and large fans are insufficient and a waste-water treatment.

5 thoughts on “Arriving in Hong Kong”