Jo Ruxton, who helped set up WWF-Hong Kong’s marine programme some years ago, was in town in October and November helping our plastic litter campaign. After leaving WWF she worked with the BBC, and after that produced the excellent award-winning environmental movie, A Plastic Ocean, about the existential risk being posed by plastic litter. 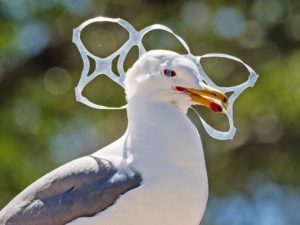 Some factoids from the film: globally 300 million tonnes of plastic are produced every year, 8 million tonnes end up in the ocean. The macro- bits of plastic can be lethal to sea-life. The film has a harrowing scene of an autopsy on a sea-bird, its stomach distended by hundreds of pieces of coloured plastic. The Internet has many pictures of sea-turtles trapped and drowned in discarded fishing nets, or plastic six-pack rings garlanding birds’ necks.

Rather than decomposing, plastic becomes brittle in sunlight and disintegrates first into beads and eventually to microscopic granules. These are ocean plastics’ end point. Mechanics and physics have done their bit; biology and chemistry let us down. In the film Jo and others try unsuccessfully to find The Great Pacific Garbage Patch a mythical island which has reportedly developed in Pacific 1500 miles from San Francisco – like some evil, plastic twin to the imagined biological island in Yann Martel’s the Life of Pi. But instead of accumulating in a single vortex waste plastic disperses throughout the world’s seas its habitat ranging from the middle of the Pacific, to both the poles.

But it’s micro-plastic that the most insidious problem. The tiny particles enter and accumulate in animal food chains starting from zoo-plankton. Plastic’s surface area acts like a sponge adsorbing and concentrating toxins in the sea water, which leach out into the stomach after ingestion. Who knows what results the bioaccumulation of hormone disruptors in plastics and the food chain is having on our health.

What really hurts is banal uses to which plastic is put – shopping bags, drinks bottles, abrasive ‘grit’ in toiletries to name just three of the hundreds of uses. As Tanya Streeter puts it, “How can a disposable product, be made from a material that is indestructible?”. Plastic cannot be thrown plastic away, as in truth there is no away. To rid economy of this curse we use something biodegradable in its place, or properly manage its disposal: plastic either has to proactively recycled, incinerated or reused. If you want to donate to this incredibly worthwhile Plastic Oceans movement here’s a link.

Like most people who watch the film I ended up with SOMETHING MUST BE DONE feeling afterwards.

At WWF, colleagues in the education team have been working with youngsters to make biodegradable bioplastics we could use instead of the indestructible petro-chemical stuff. These are not new inventions – cellulose-acetate has been in use since 1865, viscose was patented in 1892 and used to make art silk, and even sausage casing, cellophane, used to make tape, has been in use since the 1930s. Maybe the plant based plastics aren’t quite as cheap as plastic, or don’t have quite the same physical properties, but since most plastic is used so fleetingly does it matter? 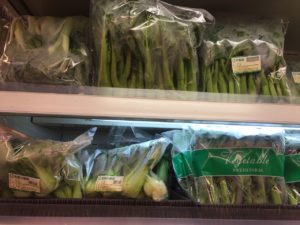 But I am no biochemist. Instead I tried to manage for a week without buying any throwaway plastic. I am not alone. Most of the plastic I throw away is associated with food. East Asian people are obsessed with food hygiene, and are not over concerned about over-packaging. See this art installation mocking Chinese over-regard for packaging. Some people prefer plastic cutlery to metal because, never mind the flimsy white crap is ineffective at cutting or piercing food, it has the virtue of being sterile.

Most take-outs near our office are sheathed in plastic wrapping, accompanied with chopsticks, and proffered in a flimsy plastic bag. I began my week scouting local eateries that presented food in flagrante – then I asked staff to hand them over to me as they were. Most staff struggled with the idea I might want to take the tuna-bun or dumpling in the doily it sat in. It’s not that they lacked the vocabulary: were familiar with the concept of ‘packaging’, and the concept of ‘no’. It’s the pairing of the two ideas that didn’t compute. The next day I started carrying my own plastic box and things became easier.

Most days I bring salads. Our downstairs supermarkets imports produce from outside Asia so its heavily packaged to keep it fresh during its flight. The local sell a huge variety of tasty, Mainland grown grown fruit and vegetable. It tastes good to me but a lot of local people shun it because of their distrust of the Mainland health and safety standards. All the milk sold in Hong Kong comes in Tetrapak, and most other dairy products come in plastic. But man can’t live on bread alone…he needs cheese.

One thought on “A week without plastic”