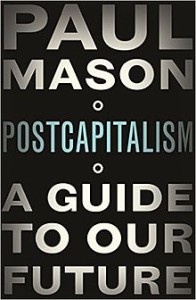 Mason is best known to Brits as a broadcast journalist on BBC and Channel 4, and as a professional northerner-Trotskyist purveyor of political balance on the interview couch. He has drawn on an eclectic mix of economists, psychologists and futurologists to substantiate his obituary of neo-liberalism.
The book’s key argument is that several megatrends make it likely and desirable for traditional capitalism to collapse. Markets are becoming increasingly irrelevant in many of their key functions like the allocation of capital, price discovery and matching supply and demand. In a world of quantitative easing and dematerialisation of production there is excess capital rather than lack, digitalisation has meant that marginal production costs for many classes of goods are virtually zero, and the Internet is increasingly making geography irrelevant so the markets for many goods have become tournaments with a single supplier like Expedia or Amazon dominating the sector through unassailable network economies.
There is reference to a fascinating essay by Marx Fragment on Machines written in 1858 in Kentish Town (near my home) in which Marx argues that innovation in organisation and technology greatly increases labour productivity, more so than the simply accumulation of capital – and machines have the potential to cheaply displace the working classes. But as we know Marx dropped this line of reasoning and the first volume of his opus published in 1867 was called Capital rather than The Terminator. We had to wait 117 years for the other great seer James Cameron to finally identify the threat posed by machines.
The book also features a slightly quixotic discussion of an economist I had never heard of Kondratieff who reached the politically uncomfortable conclusion, at least in Joseph Stalin’s Russia, backed up by painstaking statistical analysis that capitalism instead of dying and being replaced by socialist utopia always survived its internal crisis, through increasingly traumatic structural shifts – like the 1930s crash – which took place every fifty or so years. This was roughly the interval of time that the collective human brain allows hubris to overcome caution.
Mason’s book could be criticised for its rather quixotic selection of writers and events to cite, but this would be missing the point. Mason is not projecting into the future, simply into a future if you buy into his thesis. But compared to his fire-in-the-belly analysis his policy recommendations are rather tame, and some naïve. Does anyone seriously believe that if his first recommendation “Model first, act later” that macro-economic crisis could be averted; that somehow cranking the wheel on some tired old model infested with dodgy data and prejudices dressed up as structural equations would provide us with actionable insight. His other recommendations similarly feel a bit like he’d reached the end of the analysis and was left struggling with how to finish. Unlike me.

One thought on “Review of “Postcapitalism: A Guide to Our Future” – Paul Mason”